In 2014, the declaration of the Islamic State caliphate was hailed as a major victory by the global jihadist movement. But it was short-lived. Three years on, the caliphate was destroyed, leaving its surviving fighters – many of whom were foreign recruits – to retreat and scatter across the globe. So what happens now?

Is this the beginning of the end of IS? Or can it adapt and regroup after the physical fall of the caliphate? In After the Caliphate: The Islamic State and the Future Terrorist Diaspora, terrorism expert Colin P. Clarke takes stock of IS – its roots, its evolution, and its monumental setbacks – to assess the road ahead. The caliphate, he argues, was an anomaly. The future of the global jihadist movement will look very much like its past – with peripatetic and divided groups of militants dispersing to new battlefields, from North Africa to Southeast Asia, where they will join existing civil wars, establish safe havens and sanctuaries, and seek ways of conducting spectacular attacks in the West that inspire new followers. In this fragmented and atomized form, Clarke cautions, IS could become even more dangerous and challenging for counterterrorism forces, as its splinter groups threaten renewed and heightened violence across the globe.

Colin P. Clarke is an assistant teaching professor at Carnegie Mellon University. He is also a senior research fellow at The Soufan Center, an associate fellow at the International Centre for Counter-Terrorism – The Hague, and a non-resident senior fellow at the Foreign Policy Research Institute.

Daan Weggemans (moderator) is a researcher at the Institute of Security and Global Affairs of Leiden University and research fellow at the International Center for Counterrorism. He is conducting research regarding the de-radicalization and reintegration processes of violent extremists and new terrorism strategies and technologies. 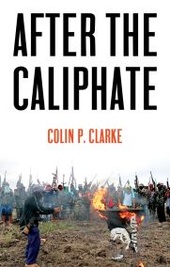 We are growing familiar with the use of algorithmic systems in the field of security through state-of-the-art visual technologies, such as face recognition, autonomous weapons, and situational awareness displays. These technologies affect how public and private actors understand, justify and define violence.