Information warfare may seem like a new feature of our contemporary digital world. But it was just as crucial a century ago, when the great powers competed to control and expand their empires.

This talk by Heidi Tworek uncovers how Germans in particular tried to control world communications—and nearly succeeded. From the turn of the twentieth century, German political and business elites worried that their British and French rivals dominated global news networks. Many Germans even blamed foreign media for Germany’s defeat in World War I. The key to the British and French advantage was their news agencies—companies whose power over the content and distribution of news was arguably greater than that wielded by Google or Facebook today.

Communications networks became a crucial battleground for interwar domestic democracy and international influence everywhere from Latin America to East Asia. The Nazi mastery of global propaganda by the 1930s was built on decades of Germany’s obsession with the news. The patterns of this past help us to understand our present, when news has again become a form of international power. The talk will be followed by remarks by discussants Vincent Kuitenbrouwer and Paddy Leerssen. Joris van Hoboken will act as moderator.

Heidi Tworek is Assistant Professor of international history at the University of British Columbia, Vancouver, Canada. She is a visiting fellow at the Center for History and Economics at Harvard University as well as a non-resident fellow at the German Marshall Fund of the United States and Canadian Global Affairs Institute. Her latest book is News from Germany: The Competition to Control World Communications, 1900-1945 (Harvard University Press, 2019).

Vincent Kuitenbrouwer is Assistant Professor of the History of International Relations at the University of Amsterdam. He specializes in nineteenth- and twentieth-century imperial history and colonial media. He currently is co-investigator on the ‘Connecting the Wireless World’ project funded by the Leverhulme Trust, and publishes on the history of Dutch global radio broadcasting.

Paddy Leerssen is a PhD candidate at the Institute for Information Law and a non-resident fellow at the Stanford Center for Internet and Society. He is trained in both Dutch and US law, with degrees from the University of Amsterdam and from Harvard Law School. His research focuses on free speech and the regulation of online platforms.

Joris van Hoboken is a Senior Researcher at the Institute for Information Law (IViR), University of Amsterdam and a Professor of Law at the Vrije Universiteit Brussels (VUB). He works on the intersection of fundamental rights protection (data privacy, freedom of expression, non-discrimination) and the governance of platforms and internet-based services. 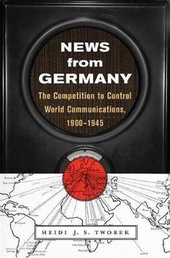