This evening celebrates the winners of the Europese Literatuurprijs (European Literature Prize) 2021: writer Saša Stanišić and translator Annemarie Vlaming will be awarded the prize for the Dutch edition of Stanišić’s novel Herkunft/Herkomst. Together with jury members Manon Uphoff (chair) and Marieke de Groot, Stanišić and Vlaming will dive into the art of writing and translating.

At the entrance you are requested to show your coronavirus pass.

This event can also be attended online.

Herkunft/Herkomst was selected by a professional jury from a longlist consisting of twenty novels translated from nine languages. In this autobiographical novel, Stanišić meticulously dissects what happened during his flight to Germany while narrating his family history.

The European Literature Prize celebrates the best novel translated last year from a European language into Dutch. The prize honours both the author and the translator of the chosen title, with the author receiving the sum of €10,000 and the translator €5,000. The European Literature Prize is an initiative of the Academic-Cultural Centre SPUI25, the Dutch Foundation for Literature, the weekly De Groene Amsterdammer and Athenaeum Boekhandels. It is financed by the Lira Fonds, the De Lancey & De La Hanty Foundation and the Dutch Foundation for Literature.

Saša Stanišić and Annemarie Vlaming will receive the European Literature Prize at the next day, Saturday November 6 at the Crossing Border festival in Den Haag. Find more info here.

Saša Stanišić is a Bosnian-German writer. He was born in Višegrad (Bosnia and Herzegovina) in 1978. In the spring of 1992, he fled alongside his family to Germany as a refugee of the Bosnian War, because his mother is Muslim and his father a Christian. In 2019 Stanišic won the Deutscher Buchpreis with his novel Herkunft. The book was published in Dutch (Herkomst) in October 2020 by the publishing house Ambo|Anthos. Ambo|Anthos also published the Dutch editions of Stanišic’s earlier novels: Wie der Soldat das Grammofon repariert (Hoe de soldaat de grammofoon repareert, 2007) and Vor dem Fest (Nacht voor het feest, 2014). NRC Handelsblad wrote about Vor dem Fest: ‘A sizzling and funny Heimat novel from one of the biggest talents in contemporary German literature.’

Manon Uphoff is a widely acclaimed author of novels, story collections, essays and novella’s. Recently she was awarded with the three yearly Charlotte Kölher prize for her prose, in particular for her most recent novel Falling is like flying (Vallen is als vliegen, 2019), which was nominated for both the Libris and Bookspot Literature Prizes and awarded with the Tzum Prize and the Bookspot Students Prize. Her books have been or are being translated in German, English and Spanish. She is co-founder of the writers collective FixDit, which propagates more diversity in literature, the canon and education.

Marieke de Groot is a journalist, editor, literary event planner and bookseller at Pantheon Boekholt in Amsterdam. During the pandemic she launched a series of digital events at Pantheon, ‘Pantheon praat met…’, to highlight books and authors that had no access to bookstores because of lockdown. 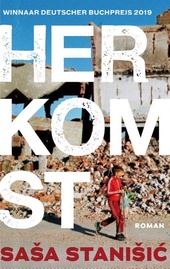 Which imaginaries and narratives of the future are currently infiltrating the Greek public sphere and Greek culture, and to what ends? This panel zooms in on contemporary Greece to ask questions that contribute to larger debates about future imaginations within and beyond the neoliberal present.