The author, dr. Ihab Saloul, addresses concepts central to debates on identity such as nostalgia and trauma, notions of home and forced travel, and geopolitical continuity of loss of place. Through an integrated method of close narrative and discursive analysis of a variety of literary texts, films, and
personal narratives, this study offers an analytical account of the preservation of cultural optimism in the face of the ongoing catastrophe, as well as the ways in which aesthetics and politics intersect in contemporary Palestinian culture.

Ihab Saloul is a postdoctoral fellow cultural heritage and identity at the University of Amsterdam, and a visiting professor culture and politics at the Otto-Suhr Institute for Political Science, Freie Universität Berlin. He was a EUME-Fellow at the Wissenschaftkolleg zu Berlin (The Institute for Advanced Study, Berlin), and taught previously comparative literature and media studies at Maastricht University.

Saloul’s interests include cultural memory and identity politics, literary theory and visual analysis, migration and diaspora as well as contemporary cultural thought in the Middle East. He is  currently working on a new book project that deals with the aesthetics of displacement and exile in Palestinian and Israeli cultural memories. Provisionally titled- Contested Memories: Homeland’s Rhetoric in Palestinian and Israeli ThirdGenerations’ Narratives -this comparative study explores the ways in which conflicted understandings of collective memory circulate in wider social worlds, helping to reshape contemporary social imaginations and political orders in the Middle East.

Luiza Bialasiewicz is Associate Professor and Programme Leader in the Department of European Studies at the University of Amsterdam. Before moving to the Netherlands in 2011, she was Senior Lecturer in Political Geography at Royal Holloway, University of London and, prior, Lecturer in Geography at Durham University. Her work focuses on the political geographies of European integration and on European borders, with some of the most recent research looking specifically at the role of third states in the ‘out-sourcing’ of EU border controls in the Mediterranean, as well as wider strategies of securitization of the Mediterranean space. 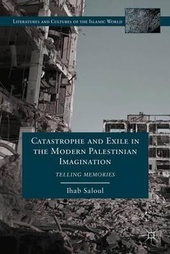 Ihab Saloul
Heritage and the Cultural Struggle for Palestine

Why do heritage projects proliferate in the West Bank and the broader Middle East? What role does heritage play in conflict (and its resolution)?