Thirty years after the fall of the Iron Curtain in 1989, historian James Mark challenges the idea of 1989 revolutions as simply a turn to a liberal West. At this public launch, he will present and discuss his new book, arguing that the long history of resistance against the liberal outcome of 1989 helps us understand the ideological depth of the current authoritarian counter-revolution.

At the thirtieth anniversary of the collapse of Communism, the liberal wave it unleashed in the East of Europe now seems to be in retreat; new authoritarians challenge democratic norms, revive statist economics, re-imagine liberal Europe as colonial, and re-map the world by aligning with resurgent illiberals such as China and Russia. Can the history of 1989 shine light onto the roots of this new world? What was overlooked in histories of what once was considered the annus mirabilis of Europe? At this event, James Mark will discuss his new co-written book and address the many visions of the future from authoritarian capitalism to populism to democratic socialism which circulated in those years, and argues that we need a truly global approach to understand why a westernising liberalism won, the fragility of the consensus it created, and its undoing in the last decade.

James Mark is Professor of History at the University of Exeter (UK) and currently fellow at the Netherlands Institute for Advanced Study (2019-20). His research interests include the history of memory, Communist and post-Communist transformations, and Eastern Europe in global perspective. He is the author of The Unfinished Revolution: Making Sense of the Communist Past in Central-Eastern Europe (2010), which was nominated for the Longman History Today Book Prize 2011 and selected as one of the ‘best books of 2011’ by Foreign Affairs. He is co-author of Europe’s 1968: Voices of Revolt (2013) and 1989: A Global History of Eastern Europe (2019), and co-editor of Secret Agents and the Memory of Everyday Collaboration in Communist Eastern Europe (2017) and Alternative Encounters: Eastern Europe and the Postcolonial World (2020).

Artemy M. Kalinovsky is Senior Lecturer in East European Studies at the University of Amsterdam and the author, most recently, of Laboratory of Socialist Development: Cold War Politics and Decolonization in Soviet Tajikistan (Cornell University Press, 2018).

Fenneke Wekker (moderator) is Head of Academic Affairs at NIAS, and researcher Political Sociology at the University of Amsterdam. 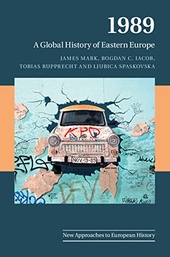 With increasing worldwide migrant mobilities it is not always clear who has the right to the city. What is the role of the newcomer in an urbanized world?

Datum
Locatie
Online
The CIA's Public Life
Are Secret Agencies all that Secret?

In this NIAS talk, fellow Simon Willmetts focuses upon arguably the world’s most famous intelligence service, the CIA, and how they have tried to come to terms with their new public role.

Datum
Locatie
Online
NIAS Talk
Whose climate crisis is it?

Where do we take the struggle for climate justice when governments continue to fail to make structural changes which are urgently needed? During this NIAS Talk, journalist Jaap Tielbeke and legal scholars Jeff Handmaker and Daphina Misiedjan discuss the role of (environmental) law in increasing efforts to fight climate change.