What does it mean when humanitarianism is the response to death, injury and suffering at the border? In her new book, Humanitarian Borders, Polly Pallister-Wilkins explores this question and inquires the politics, potential and limits of humanitarian relief in times of mobility injustice.

Drawing on research in Greece and the Mediterranean as well as illustrative examples from Calais, the Alps, Australia and the United States-Mexico border, the book focuses on the diversity of actors involved in humanitarian assistance alongside the times and spaces of action. It draws a direct line between privileges of movement and global inequalities of race, class, gender and disability rooted in colonial histories and white supremacy, and humanitarian efforts that save lives while entrenching such inequalities.

Polly Pallister-Wilkins is an Associate Professor in the Department of Political Science at the University of Amsterdam and a board member of the Amsterdam Centre for Conflict Studies. She is an expert in humanitarian responses to border violence and mobility injustice with a specific focus on the Mediterranean and the Greek Hotspots. Growing from this her current research is concerned with what Black radical — especially feminist — traditions and Indigenous knowledges can offer for a reimagined humanitarianism in the future.

Darshan Vigneswaran is Co-Director of the Institute for Migration and Ethnic Studies, an Associate Professor in the Department of Politics, University of Amsterdam and a Senior Researcher at the African Centre for Migration and Society, WITS University. His research aims to understand and explain deep changes in the structure of international politics and is primarily interested in how territory has been reconfigured in response to changing patterns of human mobility and settlement.

Anja Franck is Associate Professor in Peace and Development research at the University of Gothenburg. Her work is interested in how people navigate contemporary border regimes and how such tactics, in turn, impact the state’s ability to control peoples’ everyday lives and freedom of movement. Most of her work has centered on Southeast Asia, mostly on migration between Myanmar and Malaysia, but in more recent years she has also done work in Europe, focusing on Greece and Sweden. 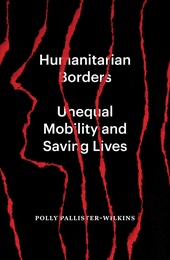 Against the backdrop of the war with Ukraine, the Russian government has sharply increased funding for state media, resulting in an unprecedented level of state propaganda spread on social media platforms. As a consequence, US and EU lawmakers and Ukrainian officials have jolted into action by pressuring social media platforms in an attempt to curb Russian misinformation. This seems to be a watershed moment with regard to freedom of the press and internet freedom. We discuss what is at stake with internet activists and journalists directly involved in war-news production.